"Shannon is one of those rare individuals who is both a first-rate researcher and an excellent writer."

Genny Beemyn, award-winning writer and Director of the Stonewall Center at the University of Massachusetts, Amherst

The Work I Do: How Have the Historical Reverberations of the Past Created Our Present?

As an interdisciplinary scholar, I've always been interested in the intersections between history and social institutions. All of my work, from my children's books to my scholarly articles, asks these core questions:

How do marginalized people find autonomy and freedom in societies determined to control and dehumanize them? What can history tell us about how we got to where we are today? Whose stories have been uplifted and whose erased? For what ends? Which perspectives have yet to be amplified and internalized at a societal level in order for systemic change to occur?

I started my academic career researching the history of sexuality, specifically LGBTQ+ social movements in the US and Western Europe. This led me to write about more contemporary LGBTQ+ movements for justice, such as those fighting the passage of Proposition 8 in California. During my Ph.D, I completed a multi-year research project on LGBTQ+ youth cultures at US women's colleges, Title IX and trans rights, and the problems of racism, classism, and femmephobia even in spaces aiming to be progressive and inclusive.

I continue to write and research on issues of social justice. You can find my published scholarship to date below. 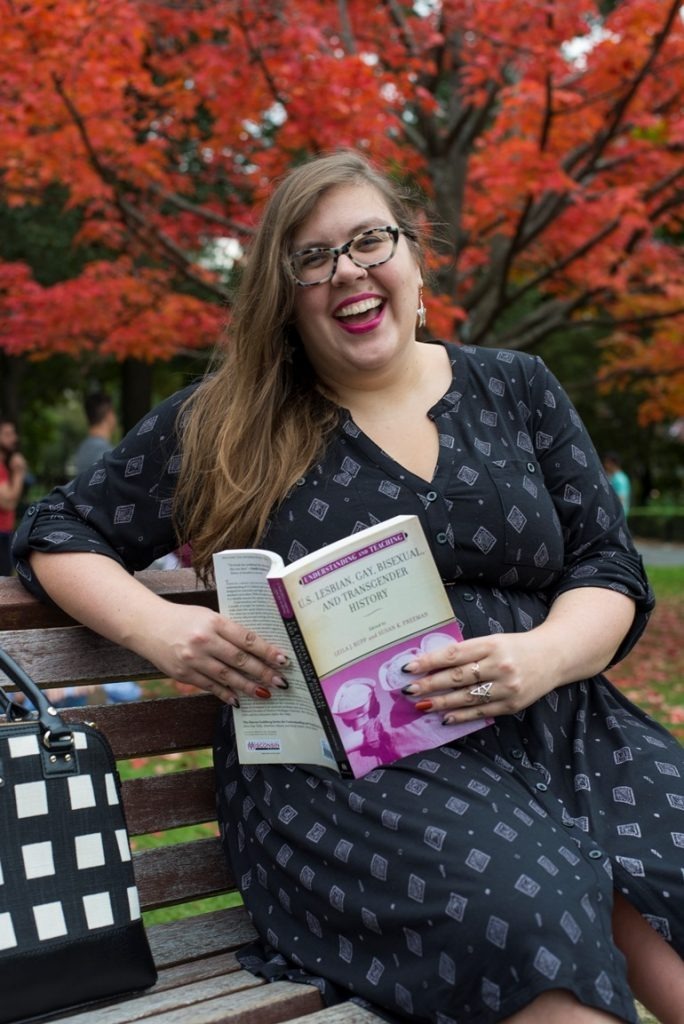 As understandings of gender have broadened and deepened beyond the rigid binary in North America in the early 21st century, women’s college students, alumnae/i, faculty and staff, administrators, and trustees have had to reevaluate their frameworks for thinking about gender. In so doing, they have had to determine what the implications are for colleges dedicated to the education of women.
Trans People in Higher Education • 1st February 2019

Part of an edited collection that addresses the experiences of trans college students, faculty, and staff in a single volume for the first time.
Political Research Associates • 1st February 2018

In 2014, a White supremacist leader, Frazier Glenn Cross, Jr. (also known as F. Glenn Miller), killed three people outside Jewish organizations in Overland Park, Kansas. Although all three were actually Christian, Cross’s intended target was clear, as was the religious justification he found for his supremacist beliefs. Cross, founder of the Carolina Knights of the KKK, which later became the White Patriot Party,1 was a convert from Christianity to a neonazi interpretation of the pre-Christian,
Journal of Lesbian Studies 20(1): 29-45 • 23rd December 2015

"Womanhood Does Not Reside in Documentation": Queer and Feminist Student Activism for Transgender Women's Inclusion at Women's Colleges

This article considers queer-driven student activism at Smith College, as well as admissions policy shifts at a number of prominent U.S. women's colleges for transgender women's inclusion. The author illustrates how student attempts to dismantle the transmisogyny at Smith as a purportedly feminist “women's” space, as well as some women's colleges' shifts in admissions policy, challenge divisions between transgender and cisgender women. This paradigmatic shift reflects the campuses as comparative havens for gender and sexual exploration, the influence of postmodern gender theory in understanding identity, and the growth of “queer” as an all-encompassing signifier for sexual and gender transgression.
Journal of Homosexuality 62(9): 1147-1173 • 15th May 2015

Daring to Marry: Marriage Equality Activism After Proposition 8 as Challenge to the Assimilationist/Radical Binary in Queer Studies

I analyze three case studies of marriage equality activism and marriage equality–based groups after the passage of Proposition 8 in California. Evaluating the JoinTheImpact protests of 2008, the LGBTQ rights group GetEQUAL, and the group One Struggle One Fight, I argue that these groups revise queer theoretical arguments about marriage equality activism as by definition assimilationist, homonormative, and single-issue. In contrast to such claims, the cases studied here provide a snapshot of heterogeneous, intersectional, and coalition-based social justice work in which creative methods of protest, including direct action and flash mobs, are deployed in militant ways for marriage rights and beyond.
International Encyclopedia of Human Sexuality, eds Patricia Whelehan and Anne Bolin, Wiley-Blackwell • 1st January 2015

This article analyzes the current dichotomy in American political and popular culture between pro-gay biological determinism, which is used to argue for LGBTQ rights, and anti-gay social constructionist ideas. This pro-gay biological determinism results in a politics of exclusion that renders queer identities falling outside a biological, lifelong model invisible. Building on Lisa Duggan’s notion of homonormativity, the author describes this discursive production as biological homonormativity, illustrated through an analysis of three key sites: an exchange between lesbian music icon Melissa Etheridge and Governor Bill Richardson during an LGBT political forum; the legal proceedings of Perry v. Schwarzenegger; and the gay cult film ‘But I’m a Cheerleader!’
Feminist Frontiers 9th Edition, McGraw-Hill • 1st January 2012

Created Instructor's Manual and student resources for the 9th edition of Feminist Frontiers Textbook. Link is to the online portal for the textbook.
Gender and Language 5(1): 153-157 • 1st February 2011